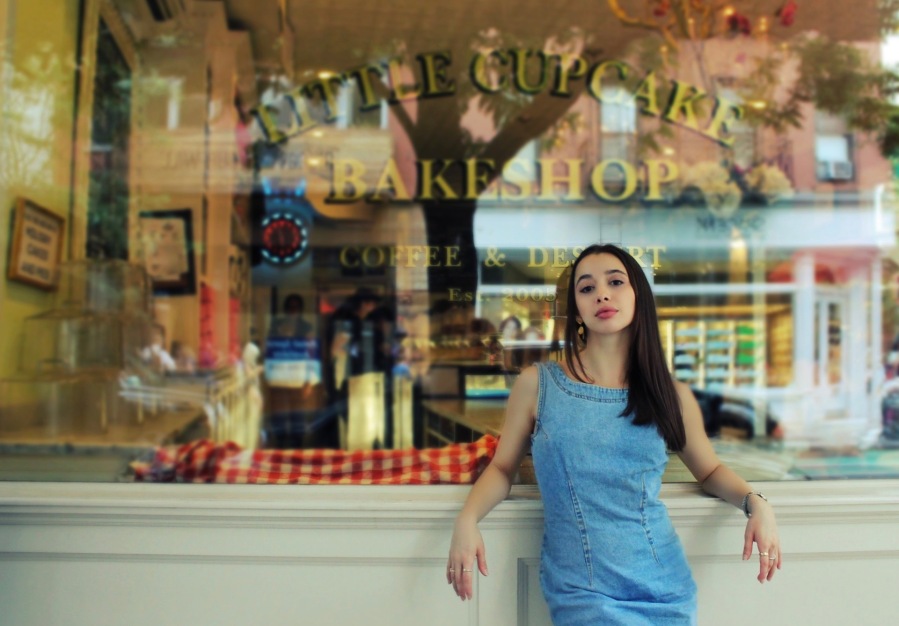 What if your dream, your golden ticket, is to perform on Broadway?

Well, meet Emma Pfaeffle, the girl who plays Veruca Salt on Broadway’s production of Charlie and the Chocolate Factory in New York City.

We arranged to speak on a sunny Friday afternoon at an adorable cupcake shop on the corner of Prince and Mott Street – quite the appropriate interview location. Her warm and bubbly personality permeated the bakery as she laughed with the bakers and purchased some carrot cake and a cappuccino. We chatted at length about everything from home remedies for smooth skin (milk and honey bath, Cleopatra style) to working with Glee’s Matthew Morrison (Mr. Schu!) to Broadway’s golden ticket.

Catch Emma in Charlie and the Chocolate Factory at the Lunt-Fontanne Theatre!

1. What is your background?

I’m from Los Angeles, born and raised. My parents are both immigrants: my mom is from Havana, Cuba and my dad from Managua, Nicaragua. I started dancing when I was four years old because my older sister did it. It just stuck. When I was nine years old, my ballet teacher, Olivia, put me in pointe shoes. I was the youngest in the advanced class and she thought that I was ready for pointe. That’s when I really got serious. I went to an arts magnet middle school where I first listened to musical theatre. I went to an arts high school in Los Angeles and I was in those musical theatre productions, although my true passion has always lied with dance.  My senior year of high school, I got my first principal role as Nicki in Sweet Charity. That’s when I was really like, “I want to do this” and decided to go to SUNY Purchase Dance Conservatory the following year.

2. How did you get your start on Broadway?

It just kind of happened. My agent gave me an appointment for the workshop of American in Paris. So, I did the workshop of that and then they basically told me they didn’t need me for the next leg of the run. I auditioned for another workshop, but this time for Finding Neverland and I booked it! It was me, five other dancers and a cast of singers and actors. It was so amazing. I was there from pre-production of the workshop, did the workshop, did the out of town touring, and then Broadway. I was there from the inception of the show to the closing. That was really, really special.

3. Your character, Veruca Salt, in Charlie and the Chocolate Factory isn’t the classic British rich-girl as in Roald Dahl’s book and the movies. How did you come up with her characterization?

For a month or so before rehearsals started for Charlie, I was working the creative lab (the time where the creative team develops the characters for this specific rendition of the show) with the choreographer trying to understand Veruca’s character. He, and the creative team, knew that he wanted Veruca to be a ballet dancer, but really didn’t know what else. They had the idea of making her Russian throughout the creative lab, and ultimately decided to use it after some trial and error. It was really cool because I got to take original aspects of her from the book and the Gene Wilder movie but then put this really different spin on her. I brought my pointe shoes into the lab one day and the choreographer, Josh Bergasse, was like “Great! Pointe shoes! You’re going to be in them the whole show.” And thus, Russian ballerina Veruca Salt was born.

4. How’s the cast of Charlie and the Chocolate Factory?

All the golden ticket winners are close, and the ensemble is so great. My dressing roommate is the girl who plays Violet Beauregard – she’s amazing. She’s hilarious and we make each other laugh. She’s a very funny woman. I’m close with the man who plays my dad. We get along so well. We have great banter and good chemistry onstage and off.

5. Five minutes before curtain – what are you doing?

I am putting on my makeup and my wig girl, Katie (love her), is putting my wig on. I don’t go onstage until half an hour into the show. She does my hair, I finish my makeup, and then I warm up.

6. What’s your favorite part of the show?

I love the squirrel ballet. That’s all I can say. It’s just great.

7. What would you tell a young teen looking to make it in Broadway?

The first thing I would say is to start taking class. Just start gaining as much knowledge as possible. To succeed in this business, you must be savvy. You have to know and be able to work with so many different types of people. You have to be able to always be on your toes. Start training now. Take dancing classes, acting lessons, singing lessons. No matter where you are, there are always good things to find. My high school quote roughly translated (it was in Spanish) to “There is nothing bad that good can’t come out of.” So even if the worst thing happens if you feel so alone and stifled in the middle of nowhere, take the opportunity to seek something out. Seek out your local theatre, watch old movies. Learn from people you like that make you feel good. See the reasons why they make you feel good. What was it about their expression, the way that they communicated with somebody? Don’t copy them, just learn from them and be influenced by them. Make the opportunities for yourself – they’re everywhere.

8. Which issues are you passionate about?

My activism stems from empathy. It’s just about understanding other people’s plight and giving them a platform for healing. I’m passionate about healing. It’s so important because whether it’s the Black Lives Matter movement or the feminist movement, which have always been on the curtails of each other looking back to the Suffrage Movement and the Civil Rights Movement, all this stuff was the same. Feminism and civil rights have always been neck and neck because we’ve always been the oppressed groups. As a victim of abuse, I’ve realized it’s not about speaking out and getting back at people – it’s about creating a space for healing. To heal is to feel freedom and to speak your truth.

9. What would you do to create a platform for healing?

Right now, in our government, specifically for the Black Lives Matter movement, there is no platform for black people to speak their truth. I want to be a person who can create a platform for that. My dad was a political appointee of President Obama’s as a lawyer for civil rights in the Department of Agriculture. He’s active with civil rights and environmental law.

I’ve been cooking up ways to combine the Broadway community and D.C. I’m hoping, when I have more time, to organize a show with people of color from Broadway and prominent political speakers of D.C. to bring the worlds of arts and politics together. Politicians could gain a lot from having an artist on their side, not only because artists are the trendsetters of today, but because of the media. There’s a reason Beyoncé sang the national anthem at President Obama’s inauguration. I’m hoping, as an artist, to gain more traction, transition to TV and film, and have more ears to listen to this. People, especially the feminist and Black Lives Matter movements, need platforms to heal. We all need to be empowered and start uncomfortable conversations. There’s always going to be another person in the room thinking “Me too!” to an uncomfortable experience.

11. If you could tell your younger self anything, what would it be?

Stay true to yourself. Keep your compass pointing north. Don’t let it falter off. Trust that being you is going to bring you happiness.

Some facts about Emma:

Brooke Stiles is a sophomore at Denison University and a contributor at GlamSalad.com. When she is not in a costume shop or thrift store, she can be found snuggled up with her puppers watching “Gossip Girl” for the thousandth time.

Cover photo shot by Brooke Stiles for The Glam Salad ©